Long time listener first time posting here.
I see a few familiar faces in the crowd from other forums I'm on. "Hello to you all!"

So my question or discussion I would like to find out more on is pertaining to the current season.
I was wondering just what were the crimes against Jesus and what were the goings on at the trial.
I tried reading the end of the book of Matthew and just couldn't find any crime that would have been punishable by death. Maybe I wasn't reading right.
Anyway if you can clear this up save me having to read more of the garbage book.

I believe when X got super pissed off at the temple and started to destroy everybody's little businesses and stuff was what bothered both Jewish religious authorities and Roman Officers just as much. From the political point of view Rome as an Empire, was there to guarantee peace for the weak just like any Empire has to. They were there to do what the Hebrews could not and even fix their internal issues 'cause as a barely civilized culture they couldn't figure it out by themselves. And on the other hand, some pissed off Jewish authorities who were offended by a man preaching against their thoughts; they will kill us right now if they had to power to shut us off.
I think that the anger at the temple was the greatest and only thing the Romans would see as a threat to their peacekeeping policies, and as civilized as the Roman were, X had to go. 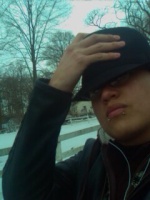 You know I can't actually remember. Off the top of my head I'm going to say it was blasphemy - but I'm off to check now.

Yeah t'was blasphemy, claiming to be God, king of the Jews, and for breaking the laws of Moses. You might want to read John 10/11 for the 'official' account of the trial.

I'm pretty sure the crime was speaking out against the Romans. This was punishable by death. You can't get this from a cold read of the Bible, you need to look elsewhere for historical context. It didn't help that he was also speaking out against the Jewish leaders (Pharisees and Seducees) and how they were corrupted and not following their own principles. So his "own people" turned him in, or at least didn't help defend or protect him.

I did read once that he (Jesus the man, if he existed), may not have suspected he would be crucified. He didn't seem to be trying too hard to get away. Internally to Xtians, this is explained as fulfillment of prophecy, but I'm not much for prophecy. Historically he may have been hoping to get some street cred by getting arrested, but expected he would be released. The shock of his death, of a beloved leader and teacher that seemed to be making some difference, may be what inspired the gospels. The rest is history.

I remember reading in one of Ehrman's books that Jesus was brought up on charges much after he caused trouble in the Temple. That if it was due to the '
crime' in the temple, he would have been brought to trial much sooner.